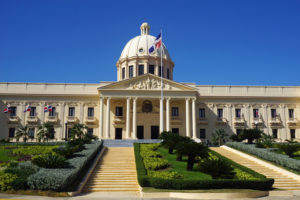 By means of the U.S. government’s improvement financial institution, Overseas Private Investment Corporation (OPIC), the US Ambassador Robin Bernstein presented Minister of Finance Donald Guerrero Ortiz a consensus signed by the United States and Dominican governments to improve investments by US companies in the Dominican Republic.

According to Bernstein, OPIC’s visit in December 2018 was the first step in highlighting the excellent opportunities available in the Dominican Republic – this procedural effort is the next step.  The U.S. continues to work to secure free and fair trade with allies and improve access to regional markets in Latin America in a transparent way. ‘’Expanding commercial relations with our neighbors in the hemisphere is a key part of President Trump’s effort to push back against unfair trade and investment practices and protect the economic security of the region’’ said the Ambassador’’

Minister Guerrero Ortiz explained that the “Operational Procedure for Government Approval of Projects” defines the way in which the Ministry of Finance, on behalf of the Dominican Government, will give its approval for projects that generate an economy flow like this one. He also said that the projects financed by this US financial institution are managed by the private sector and financed with private capital. “In this sense, we emphasize that they will not be developed with public support, they will not generate an increase in public debt and will not have any type of associated public guarantee, “said the official.

The Finance Minister expects that the projects submitted to OPIC will advance the formation of value employments in the Dominican Republic and the United States, advance the productive profitable of American capital in the island nation, produce monetary development in key zones and help increment the business stream between the two nations, as he showed in his comments amid the occasion.

Via: US Embassy in the Dominican Republic News
Published on February 06, 2019